The Journal of Blacks in Higher Education

Nationwide, the racial gap in college graduation rates has remained constant at about 20 percentage points over the past 20 years. The huge racial gaps in income and wealth coupled with a lack of sufficient financial aid are undoubtedly a major reason why Black students face a more difficult time in completing their degrees than Whites.

Financial factors are undoubtedly a major factor in the low graduation rates at many of the nation’s historically Black colleges and universities. Despite these factors that tend to put a drag on graduation rates, many HBCUs have made tremendous progress in recent years in increasing the graduation rates of their African American students. The chart below tracks the Black student graduation rate at large group of HBCUs during the 1998-to-2011 period. 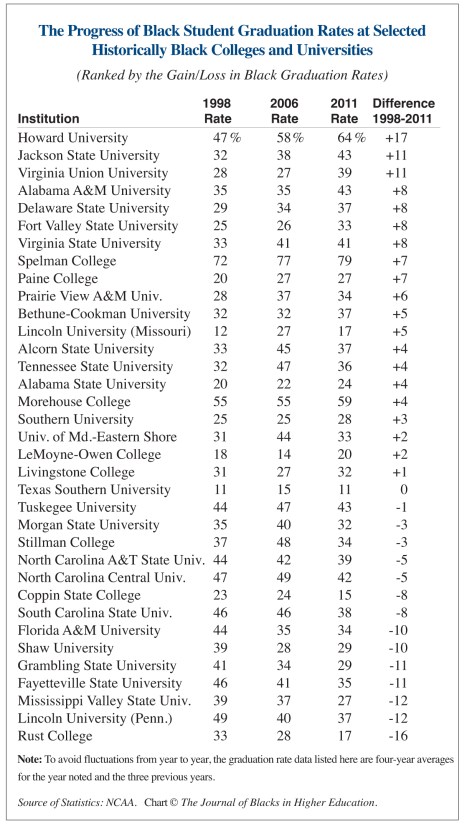 Other HBCUs have shown a downward trend since 1998. The Black student graduation rate at seven HBCUs has dropped by 10 percentage point or more in the 1998-to-2011 period. The HBCUs in the group surveyed by JBHE with the largest decreases are Rust College, Lincoln University of Pennsylvania, Mississippi Valley State University, Fayetteville State University, Grambling State University, Shaw University and Florida A&M University.

* The graduation rate is calculated by comparing students who entered an institution in a given year with those who earned their bachelor’s degree from the same institution within six years. To avoid statistical anomalies for any particular year, graduation rates reported here are a four-year averages.